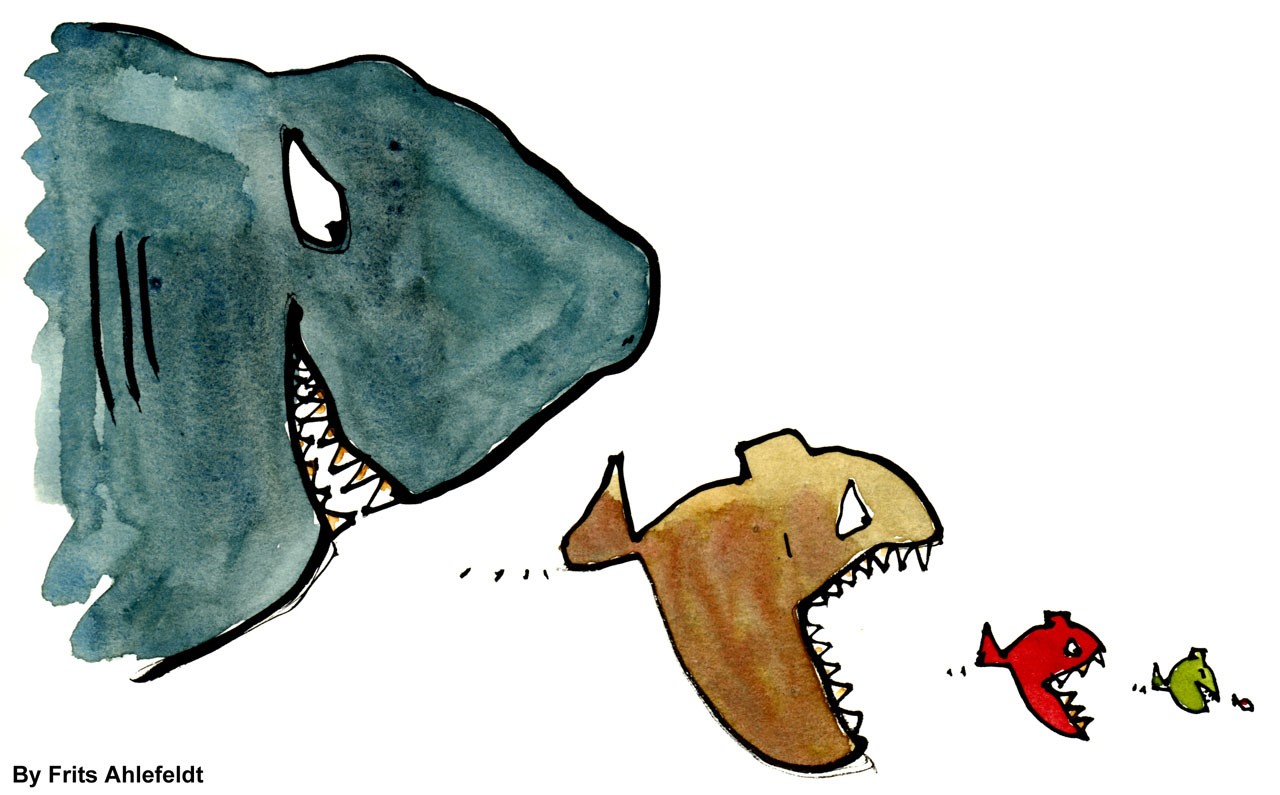 There has been quite a bit of movement in the open access world in the last few months, not least because of PlanS, which was made public just days before Open Con. Much can and should be said about this initiative but in the end, this is still a discussion about how we best get research results, particularly finished texts (articles or books), into open access. While this is, of course, still the main objective, I have been increasingly concerned about a related aspect of scholarly work: the shifts in ownership of infrastructural instruments, not only in publishing but across all work environments of campus. I used my presentation at Open Con Switzerland on September 21st to outline this concern and suggest how libraries in general and Swiss libraries in particular can counteract this development.

There is always a bigger fish

There has been an increase in news lately about acquisition of technological infrastructural instruments. This is nothing new – we know, for example, that big publishing houses have been gobbling up smaller ones for years – but what seems unusual is that companies no longer acquire start-ups and smaller enterprises that work in their focused line of business; instead they broaden their portfolio across all work environments on campus, from funding via teaching to administration and metrics. This means that any innovative infrastructural tool – including those in the #openscience movement – is increasingly at risk of being acquired as soon as it is scalable, profitable or too much competition for proprietary solutions that are in the hands of a powerful company. Two examples in particular gave me pause.

The British company *Research Ltd, formerly known as Research Research (no, really), is specialized on supporting researchers with services to find and secure external funding. They were recently acquired by Ex Libris, an established Israeli/US company that is known for its software solutions for libraries. Ex Libris in turn was purchased a while ago by ProQuest, a larger US-based outfit that describes itself as “an international information and tech company”. ProQuest is not the end of the chain but itself part of the privately owned Cambridge Information Group.

If the previous example affected the academic realm of funding, the next example concerns teaching. A short while ago we learned that SAGE Publishing bought Talis Group, who specialize in software solutions for teaching in higher education. In the press release about the acquisition, SAGE Publishing’s Vice-President said: “The addition of Talis and their specialist skills is a strategic shift for SAGE as we expand our offerings into software that supports learning and research.”

Arguably, none of this is particularly surprising. In our latter days of neo-liberal capitalism, it is normal that big companies grow bigger and diversify, often by purchasing promising start-ups. What is disquieting about this increasing concentration of market shares in fewer and fewer hands is that we are faced with an impending lack of transparency, competition and most likely innovation in all realms of academic work. At the same time, institutions need to brace themselves for the likelihood of price hikes and a loss of independence.

The role of libraries

Little can be done to prevent this trend from continuing. We will continue to witness mergers, take-overs and acquisitions for some time yet. In the meantime, however, it is crucial to secure an open alternative to these proprietary services and instruments. Efforts to this end are already underway, for example in the realm of research production:

Here we see a route of open source instruments that allow all researchers to maneuver the #scholcomm landscape with open source solutions. It is the task of libraries, particularly those with some financial freedom, to strengthen and protect this path not only for research production but for all aspects of scholarly work. In addition to the classic tasks of curating, preserving and guaranteeing access to scholarly information, we must vet, support, implement, preserve and further develop infrastructural instruments while also offering services to academics (and perhaps also administrators) on how to use these open instruments.

To make this happen we need to cooperate with the main stakeholders: funding instruments to ensure continuous innovation and development; lawmakers to keep the sharks off our backs, and institutions to grant us the room to grow and adapt to our new responsibilities. In Switzerland much of this is possible: not only do we already have a progressive national open access strategy which is not that far off PlanS; we also have a workable number of stakeholders (and yes, I know this may be a tad optimistic given the fiercly federal mindset in this country).

But all such undertakings will be futile unless we find a way to get all researchers on board: from BA-students who take their first steps in research and scholarly learning to post-docs who are in the middle of establishing their career to the decision makers in hiring committees and established chairs. We need researchers’ input to build and secure the right instruments that further research, teaching, and administration; that are easy to handle and facilitate compliance with open access mandates. Not only do we need researchers to fill excellent content into the vessels we build and make available, be it in repositories or Open Access publishing infrastructures; we also need to work with them to secure an alternative, open digital work environment that remains transparent, reusable and accessible to all.