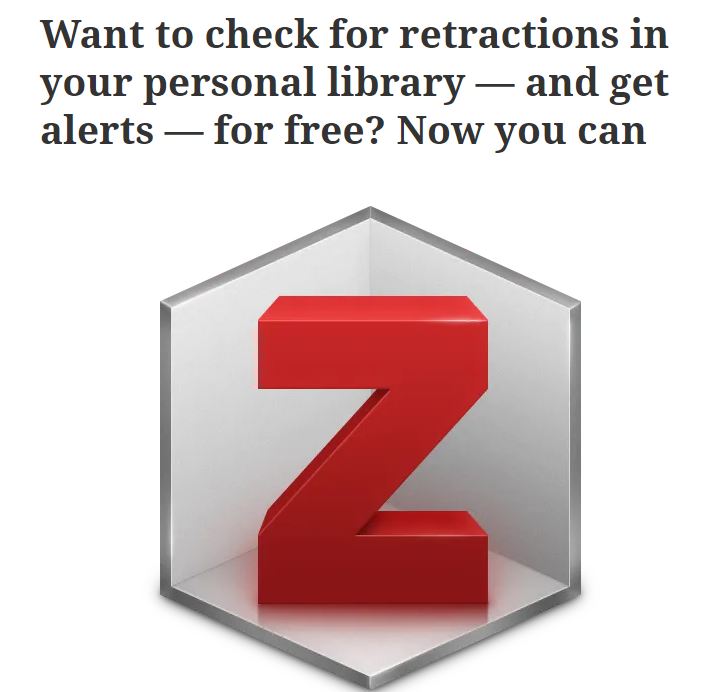 Earlier this month, a Twitter-post from SNF president Matthias Egger caught our eye:

As of Zotero version 5.0.67, it is indeed possible to see in a Zotero bibliography, whether an article has been retracted. We were curious about the specific requirements needed for the retraction information to work. On Zotero’s blogpost introducing the new functionality it says:

Currently, this feature is limited to items with a DOI or PMID (entered in the DOI field or in Extra as “DOI:”, “PMID:”, or “PubMed ID:”), which covers about 3/4 of Retraction Watch data, but we’re hoping to support items without identifiers as best as possible in a future update.

This is a really promising functionality that will make life easier for many a researcher.

In the press-release by Retraction Watch we learned more about how this collaboration came about:

As Retraction Watch readers know, making that kind of functionality possible has been our goal since we announced plans to create a comprehensive database of retractions. Once that database officially launched last October, in conjunction with an analysis of its contents by reporters at Science, we began discussions in earnest with potential partners who could make that happen.
We’re pleased that the first such collaboration is with Zotero

The last sentence implies that there may be more such collaborations in the pipeline with other, commercial reference management systems. Sure enough, in the replies to Egger’s Tweet there was a question for Citavi about whether they have a similar functionality:

So, here it is. The highly anticipated publicly available draft MGA for Horizon Europe. Aligning (even stronger) with @cOAlitionS_OA and advancing with #openaccess for books and other long-formats. https://twitter.com/bearore/status/1366369736502747141